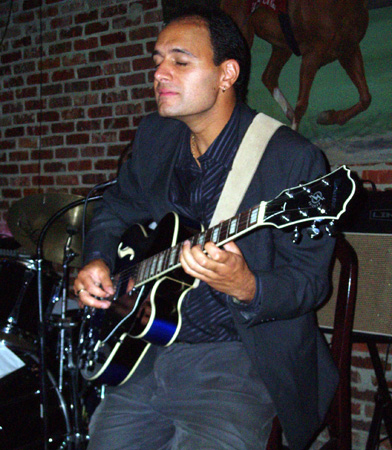 Born in 1974 just outside London, Fabian Fernandez was introduced to music at a very early age. With a colorful cultural mixture of Puerto Rican on his dad’s side and Welsh on his mother’s, always a character, Fabian enjoyed singing, playing music and entertaining people!

He began playing his first guitar, a gift from his dad (a professional musician and Fabian’s primary musical influence), at the age of 8. At 10, Fabian began playing guitar in the local church choir in South Wales, where the family had re-located. At home in the Fernandez family, music was a regular thing with Fabian, his brother and his 2 sisters all playing different instruments and singing.

At age 15, Fabian played his first professional guitar gig alongside his older brother (on drums), playing in his father’s band, Phil Fernando & the Rhythm Express. Depending on the line-up of musicians, Fabian would switch off between rhythm guitar, and bass, as well as singing back-up vocals, and occasionally lead vocals. The band covered a cross section of styles and the experience of playing with his father would be the start of many musical adventures!

Leaving high school at the age of 16, Fabian attended a local college for computer studies in the town of Aberysytwyth, West Wales. This 3 year period suited Fabian down to the ground, as he studied, partied, took up martial arts training and played an abundance of gigs in the local area with various rock bands. All this while, he continued to play with his fathers’ band. Fabian listened to a lot of different styles of music throughout his teenage years and his main guitar influences were Angus Young, David Gilmore, Robert Cray, BB King, Albert Collins, Richie Blackmore, Jimi Hendrix, Brian May, Steve Vai, George Benson and Wes Montgomery.

The Leeds College of Music

During this time Fabian also began to travel and see different countries whenever the opportunity arose. In 1994, Fabian moved to Liverpool to study music. This program was a one year course designed to teach a wide variety of musical areas in a very intensely structured environment. The course was led by Lenny Gray, a great teacher and mentor to Fabian. After passing this course with distinction, Fabian applied for, auditioned and was accepted at the prestigious Leeds College of Music to study guitar on the Bachelors Degree in Jazz Studies. While at Leeds, Fabian was surrounded by some of the best young Jazz musicians in the UK and was also fortunate to have spent a semester as an exchange student at the Rotterdam Conservatory of Music. it was an awesome and amazing time that few get to experience.

On to the United States 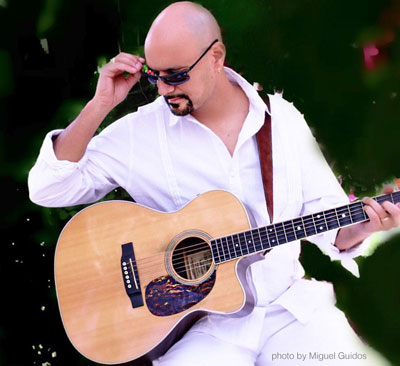 Soon after Graduating from Leeds, Fabian moved to Miami, Florida in 2000, where he spent 2 years playing and teaching music. Fabian has performed live with dozens of renowned acts, such as the legendary Gypsy Kings, The Phil Woods Big Band, The Miami Sound Machine, Felix Pastorius, Kenny Aronoff, Marvin “Smitty” Smith, and Vinnie Colaiuta among many others. He has entertained audiences from the decks of Mediterranean cruises to the Playboy Mansion.

In 2002, he made his way across the country on a road trip to Los Angeles, California – where he lives and works as a professional musician, performing, producing, arranging and teaching. Fabian is a much-in-demand session player and spends a lot of his time in the recording studio. His scoring and performance work for Nickelodeon can be heard on many episodes of their animated series, SpongeBob SquarePants.

After releasing his first solo album, I Welcome You!, a collection of original pop and rock tunes with The Fabian Fernandez Band, he returned to his first love, jazz, and was off for several months on a tour of Europe and South America with his jazz trio. The tour took Fabian and the boys to Germany, Holland, Spain, France, Colombia and Brazil, and concluded with a concert in his native Wales. It was Fabian’s first opportunity to perform for an audience packed with old friends and family since leaving Wales several years earlier.

Back in the U.S. and living with his beautiful wife and son, Fabian has just released an album of original jazz compositions titled Alps to the Andes. This new release is now available on iTunes, CD Baby and other online music outlets.